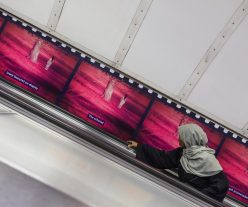 A not/nowhere x Other Cinemas Super 8 workshop that approaches analogue filmmaking from the technical hands and theoretical perspectives. This workshop was delivered to members of the Other Cinemas’ film school aimed at Black and non-white filmmakers in Brent, London. This film school operates as a collective and helps not only share the basic skills needed to be a filmmaker through peer-led learning but also examines ways we can help each other create films which challenge the mainstream. From editing, lighting and operating a camera through to exploring issues of consent, race and colonialism, the film school collective seeks to build a supportive network of filmmakers who can rely on each other to grow, learn, create and engage critically with film.Inspired by Rhea Storr’s Art on the Underground commission Uncommon Observations, this three-part workshop begins with an online lecture on the visual structure of film and draws connections to writing and theory from Edouard Glissant, Saidiya Hartman, and Dionne Brand. Part two is an in-person introduction to using Super 8 cameras and shooting film. The group will explore some key creative features of the Super 8 format and the standard operation: how to load the camera and how to expose film correctly. The group will each have time for dedicated independent shooting, sharing a camera with one other participant to each shoot 2.5 minutes of Black and White Super 8mm film stock.In part three a feedback session will give time and space to watch and provide feedback on the Super 8 films. 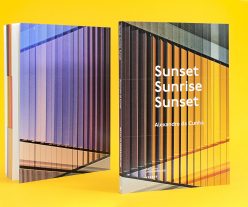 Launching on 6 October 2022, Art on the Underground and Kerber Verlag present a new publication on the work of Alexandre da Cunha at Battersea Power Station, to celebrate one year on from the station’s opening.

Join us from 7pm on Thursday 6 October 2022 in the bookshop and café at Camden Art Centre, Arkwright Rd, London NW3 6DG.

Alexandre da Cunha will be in conversation with Lisa Blackmore, Senior Lecturer in Art History and Interdisciplinary Studies at the University of Essex, who has written on da Cunha’s work for this new publication.

Writer Rebecca Watson will read her creative response to the artwork, ‘That Pink’, which features in the book.

The book will be available for purchase at a special discounted rate, alongside drinks from Bar Bicicletta, with thanks to Thomas Dane Gallery. Free tickets are available via Eventbrite. 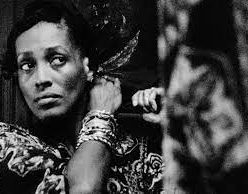 5 more minutes: An evening of films with Joy Labinjo at The Ritzy

Join us for an evening of films with Joy Labinjo in connection with her commission at Brixton Underground station, 5 more minutes.

Joy Labinjo has curated a selection of films from the Cinenova collection – a volunteer-run organisation preserving and distributing the work of feminist film and video makers. In connection with ‘5 more minutes’, the films explore ideas of Black Feminism, Black Visibility, community, girlhood and hair.

The programme will be introduced by Joy Labinjo and include readings and introductions from invited guests, including contributions from filmmaker Veronica Martel, Tracey Francis from Cinenova and Women in Film SE15 and from poet and writer Sarah Lasoye.

What starts as a row over the child’s haircut, develops to explore the wider social issues of the responsibilities of child rearing and childcare.

Hairpiece is an animated satire on the question of self-image for African American women living in a society where beautiful hair is viewed as hair that blows in the wind and lets you be free. Lively tunes and witty narration accompany a quick-paced inventory of relaxers, gels and curlers. Such rituals are all-too familiar to African American women-and indeed to all women confronted with an unattainable ideal of beauty.

– On the Inside by Sarah Lasoye

Sarah Lasoye is a poet and writer from London, as part of this event Sarah will read a piece of prose writing titled On the Inside, a response to Back Inside Herself by S. Pearl Sharp which explores internal conversations, cycles of retreat, rest and self-preservation. Commissioned by Cinenova as part of their 20221/22 programme The Work we Share. Sarah Lasoye is an alumna of the Barbican Young Poets programme and a current member of Octavia – Poetry Collective for Women of Colour. Her debut chapbook, Fovea / Ages Ago, was published by Hajar Press in April 2021.

Described by the director as “a visual poem on identity”, Back Inside Herself shows a Black woman finding her own sense of self and rejecting hegemonic societal expectations of who she should be and how she should behave.

AND WHAT DOES YOUR MOTHER DO? is a humorous film which cleverly uses the technique of speeded-up action, to expose basic inequalities built into the traditional family structure, which lay the bulk of responsibility and pressure on women. 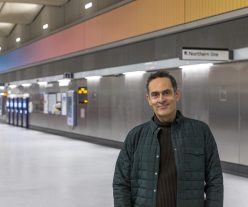 Stretching 100m and 60m in length, the artwork incorporates two friezes that face each other along the length of the ticket hall. Made using an outdated advertising mechanism – the rotating billboard – Alexandre da Cunha has created a moving sculpture. The artwork was inspired by the former control room at Battersea Power Station and its system of vertical bars that regulated the production and output of electricity into the city. Bringing these resonances together with the daily flow of dawn to dusk, Sunset, Sunrise, Sunset refers to cycles, routine, the everyday and eternity.

Join us to hear about the conceptual basis of the work, the challenges of working within a major construction project and to discuss the impact of art in public spaces.

Nearest tube stations are Oval and Vauxhall.
Gasworks is not open to the public on Tuesdays so please ring the buzzer for entry.

Covid Information:
Masks are required for the exhibition space at Gasworks and are strongly encouraged in the common spaces and the participation room. The talk will take place in a room ventilated via doors and windows. Please don’t attend if you are feeling unwell. Please consider taking a Lateral Flow Test before you join us. 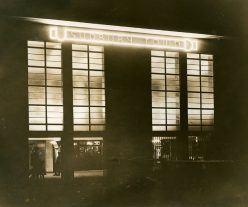 In 2020, artist Lucy McKenzie’s most ambitious permanent public commission to date transformed the iconic Modernist station Sudbury Town. McKenzie’s work drew on historic advertisements of the inter-war period, held in the London Transport Museum archive. In April 2022, Lucy was joined by Fiona Orsini, Curator of RIBA Drawings & Archives Collections, to discuss how her Art on the Underground commission interacts with the history and architecture of the station, designed by Charles Holden in 1931.

Scroll to the bottom of the page to watch a recording of the event.

Lucy McKenzie (born Glasgow 1977, lives Brussels) is a visual artist whose installations explore the interplay between painting, style and value. She has exhibited her work around the world, including solo shows at Tate Britain, London in 2003, MoMA, New York in 2008, Stedelijk Museum, Amsterdam in 2013 and Fondazione Bevilacqua la Masa, Venice in 2017, and, together with designer Beca Lipscombe, produced fashion collections under the name Atelier E.B. Their exhibition, Atelier E.B: Passer-by, was staged at Serpentine, London in 2018, Lafayette Anticipations, Paris in 2019 and Garage, Moscow in 2020. In 2020 and 2021, McKenzie was the subject of a major touring exhibition held at Museum Brandhorst, Munich and Tate Liverpool.

Fiona Orsini is Curator at the RIBA Drawings & Archives Collections, based at the V&A. She has worked for the Royal Institute of British Architects since April 2006 and has curated a number of exhibitions at the V&A including Underground Journeys: Charles Holden’s designs for London Transport, Mind Over Matter: Contemporary British Engineering (with V&A colleagues Olivia Horsfall Turner & Anna White) and most recently Into the Blue: the origins and revival of pools, swimming baths and lidos (co-curated with RIBA colleague Susan Pugh), as well as contributing to V&A public programmes with presentations on ‘Charles Holden and 55 Broadway’ and ‘Metroland and Art Deco in the Suburbs’. She is currently co-authoring a book on the history of architectural drawings. 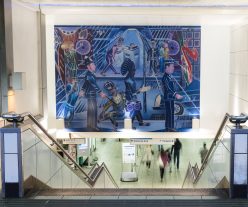 For nearly four decades, Denzil Forrester has evolved as a painter who experiments with light, colour and gesture, creating works that are rooted in the physicality and emotional resonance of lived experience, and which seek to evoke a sense of time, place and community.

In September 2019 Art on the Underground invited Forrester to create his first major public commission for Brixton Station. For this Forrester reinterpreted his seminal work ‘Three Wicked Men’ (1982), now in the Tate collection, into an immersive, large-scale painting. 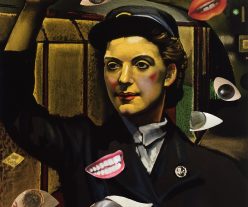 Join Linder in-conversation with Art on the Underground Curator Kiera Blakey to discuss her recent public commission ‘The Bower of Bliss’ at Southwark station.

The commission, an 85 metre billboard, manifests at Southwark station in the histories, myths and fables of the many women Linder uncovered while artist-in-residence in Southwark. From Londinium sex workers in AD 43; to an 1815 illustration of the Night Queen from Mozart’s opera ‘The Magic Flute’ inspiration for the station architects; to the women who run London Underground today, Linder’s photomontage reclaims the representation of women from the male gaze to form a picture of empowerment for women everywhere. 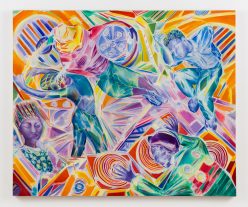 In collaboration with Art on the Underground and Royal College of Art.

As part of Denzil Forrester’s forthcoming UK public commission with Art on the Underground join the artist and Matthew Higgs, Director of White Columns in New York for a lively discussion on the artist’s practice, teaching and inspirations.

For nearly four decades, Forrester’s paintings have been rooted in, and provide commentary on, the Afro-Caribbean experience in London. Pulsating with rhythm and an extraordinary use of colour, Forrester’s expressive depictions of dance halls and clubs captured the crowds moving in unison to the beat of the music. In contrast to the joy of his night-time revellers, Forrester concurrently created a series of works which subliminally revealed the rising tensions between police and the Afro-Caribbean community during the late 1970s and early 80s, which culminated in the 1981 Brixton Riots.

Through his energetic paintings, Forrester continues to make work about the past and present aspects of his life. For this commission, the artist has reinterpreted his seminal work Three Wicked Men (1982), now in the collection of Tate, London, into an immersive, large-scale painting. Made during his time at the Royal College of Art, Forrester has returned to Three Wicked Men several times over the decades. The title was borrowed from a track by Reggae George, released a year earlier, in which Forrester identifies the three men as a policeman, a politician and a businessman. In Forrester’s painted versions, the latter figure is often replaced by a Rasta. Reflective of the contemporary black experience and the racial tensions of the time, the painting features Winston Rose; a friend of Forrester’s who died whilst under police restraint in 1981 and which would continue to haunt many of his paintings for the next decade.

Forrester is the third commission in a new series at Brixton, following on from Njideka Akunyili Crosby in 2018 and Aliza Nisenbaum in 2019. The programme selects artists to respond to the diverse narratives of the murals from the 1980s, the rapid development of the area and the wider social and political history of mural making. 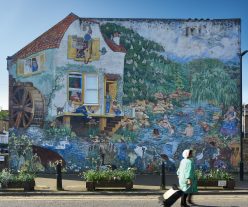 Come and listen to local historian and Blue Badge Guide Kelly Foster as she explores the memorialisation and portraiture in Brixton’s public art. From familiar sculptures to the lost murals she’ll look at who has been commemorated on the streets of Brixton and the artists that created them.